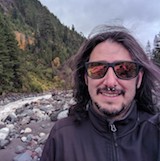 I’ve been in Guayaquil, Ecuador for almost a week now. Typically, when I’m traveling internationally, I just stay at hostels. But since I’m spending 9 days here before the Salinas Wingsuit Boogie and traveling with thousands of dollars of skydiving equipment, a private AirBnB seemed a lot safer than a shared room hostel this trip. At $35 a night, it’s a great deal and it gives me privacy and comfort to work when I’m not exploring the city.

Now that I’ve had some time to acquaint myself with the area and culture, I thought I’d give my initial impressions of Guayaquil. This is my first time in South America so I’m not sure if these observations extend to other countries or even other cities in Ecuador. I’ll update this post once I’ve been to Salinas.

The weather here during the rainy season is consistently inconsistent. As a rule, I don’t pay attention to weather forecasts since they’re almost always bullshit anyways. I subscribe to the weather rock philosophy.

Growing up in Florida with its “100% chance of rain every day” during the summer actually meant “10-60 minutes of rain between 1-5pm”. It was predictable. Here it might rain for an hour, it might be a downpour, or light sprinkles. It might last an hour or six hours. Could be in the morning or afternoon. You never really know. There’s no real rhyme or reason to the weather patterns here based on my week-long observation.

There are dogs and cats everywhere in the city. You can’t really tell if they’re wild or a pet because they’re usually just laying on the sidewalks or hanging out near a shop but not close enough to know if it actually belongs to the shopkeeper.

Parque Seminario is a locally famous park and tourist attraction where lots of wild iguanas live. There are street vendors selling bags of lettuce and the iguanas won’t hesitate to crawl all over you to get the food. They’re pretty tame and very photogenic!

There are little shops everywhere. They almost all have bars over the entrance that make them look closed from a distance, but it’s just to keep thieves out. Just walk up and tell the shopkeeper what you want and they’ll give it to you through the bars. They’re all unique and carry different varieties of things though most will have unmarked bags of plantain chips, and assorted snacks, as well as water and cola products.

That being said, I have not seen a single place that sells diet soda. Even the grocery store and multinational food franchises don’t carry diet soda products (so far I’ve checked McDonalds, KFC, and Wendy’s). Sugary drinks it is!

Most of the buildings have metal rolldown doors over the windows and doors that are locked with heavy padlocks when the businesses are not open. The power lines throughout the city are a rat’s nest and sometimes power lines hang low enough to touch them as you walk by. Electrical safety doesn’t seem to be a big concern here and I’ve seen multiple power outlets that look like they’ve had fires in them but are still in use somehow.

Doors and windows are left open a lot because of the lack of air conditioning in many places. Seals on the doors and windows are basically nonexistent so when there is A/C it’s wildly inefficient. This also makes road noise a lot more noticeable inside of buildings.

Getting around the city

Taxis are plentiful, as well as unmarked vehicles that are acting as (I assume) unregistered taxis. I’ve heard some horror stories, and even my AirBnB host recommends calling a legitimate taxi service to arrange transportation instead of hailing one on the street. My chances of getting ripped off as a foreigner who barely speaks Spanish are much higher so I’ll stick to pre-arranged cabs where I know the fare ahead of time.

Jaywalking is a way of life here. There are stoplights and crosswalk signs, but in practice nobody pays attention to them at all. If no car is coming (and sometimes if there is one coming) you just walk out into the street whenever you’d like. #jaywalkinglife

There are police officers on just about every other intersection. You’d think this would curb the epidemic of jaywalking but they don’t seem to care.

Cars are beeping at you all the time! I’ve noticed several ways that drivers attempt to communicate with pedestrians but all fall short because you never know what they mean by the beeping…

“The light is green/yellow and I’m not slowing down, better watch out!”

“The light is red and I’m slowing down, you can start crossing the street in front of me now!”

See how all the beeping can become confusing?

There are men in high-viz vests waving red rags all over the place. They help people parallel park on the city streets since there is sometimes only a few centimeters between cars. I have yet to determine if they’re employed by local businesses, take a donation for their services, or make their money by washing your vehicle while you’re going about your activities. Either way, If I was driving around the city I’m sure that I’d appreciate someone telling me how close I was to the car behind me as I’m parallel parking.

The busses in the city drive like there’s no tomorrow. There’s a special bus lane on the larger streets and they come barreling down the road like a bat out of hell. Most of the time the busses seem to be loaded to 300% capacity! So far I haven’t ventured onto the busses and probably won’t (even though the fare is only $0.30).

Overall the city is fairly clean and I see guys in orange outfits with brooms and dustpans all over the place. But it seems like they just put all the garbage in the river because it’s full of plastic bottles and trash floating around. I visited Isle Santay, a National Protected Area, and was dismayed at the amount of trash in this wetlands area that was supposed to be a wildlife sanctuary.

I read the other day that putting trash in its place is not part of the Ecuadorian cultural consciousness yet, but the government is working on programs in schools to help change that in the next generation. There’s also public recycling bins around the city in public spaces that are helping raise awareness of this issue. These bins are particularly prevalent by the waterfront, yet the other day I saw an older man drop a plastic spoon on the boardwalk, look at it, and continue walking.

You can do better, Ecuador!

Overall, I’ve found Ecuadorians to be very friendly. Many only speak Spanish, but the ones who do speak English are usually very good at it and appreciate the chance to practice with you. Visitors will definitely have a hard time navigating the city if they speak zero Spanish. Mine is barely passable but I can get by with a few phrases, the Google Translate app, and “yo no hablo Español” with a shrug.

If you’ve got body modifications like tattoos or non-traditional piercings, expect to be looked at funny. It doesn’t seem like there is a big body modification culture here and seeing tattoos on the locals is rare where I have been. I get stared at a lot, but that could also have to do with my height.

So far, the food has been spectacular! The seafood and vegetables are fresh and priced well. I’ve been trying to eat at local restaurants but can’t help but test out the multinational franchises just to see how the tastes vary in other countries.

Some of the larger restaurants have two food counters - one near the entrance that has a limited menu and is generally easy things like ice cream and snacks to-go. Then there’s the standard counter inside with the full menu. There’s almost always a guard at the entrance dressed in black and carrying a nightstick.

Empanadas, bananas/plantains, fresh fruit juice, and churros are available on practically every street corner at both official looking stands and street vendors with carts. But watch out for the sub-$1.00 empanadas… I probably don’t have to explain that to you. (🚽🏃💩👎)

My AirBnB host has a water jug in the apartment for me. He says the tap water is only for washing dishes and showering. I’m not going to test that.

Speaking of water, it’s HOT here! If you leave and forget your own water bottle or run out of water, rest assured there’ll be someone walking down the street yelling “agua-agua-agua-agua! Tetenta y cinco! agua-agua-agua-agua!” It’s almost like a song and you can hear multiple vendors at once in populated areas such as parks and intersections. Prices vary from $0.75 to $2.00 a bottle and you can haggle if they try to charge you the higher prices.

Wow, that’s a lot of information! I hope you enjoyed my brain-dump and opinions about Guayaquil. Overall, I’m really enjoying my trip so far. I haven’t felt unsafe in the city (even at night) and I’d wholeheartedly recommend anyone interested in visiting Ecuador to make a stop here. It’s full of history and culture!